Artists’ Best Kept Secret
Renato’s is the place where actors, writers, artists and musicians have relaxed for decades over a drink and some Italian food – that’s why it is known as La Taverna dell’Artista. “Renato’s Forever” were the words Sir Ian McKellen wrote celebrating his decades of popping in whilst working in Bristol. Renato’s was also watering hole to bond women Samantha Bond (Miss Moneypenny in Tomorrow Never Dies), Naomie Harris (Eve in Skyfall), and Dame Judi Dench (M). 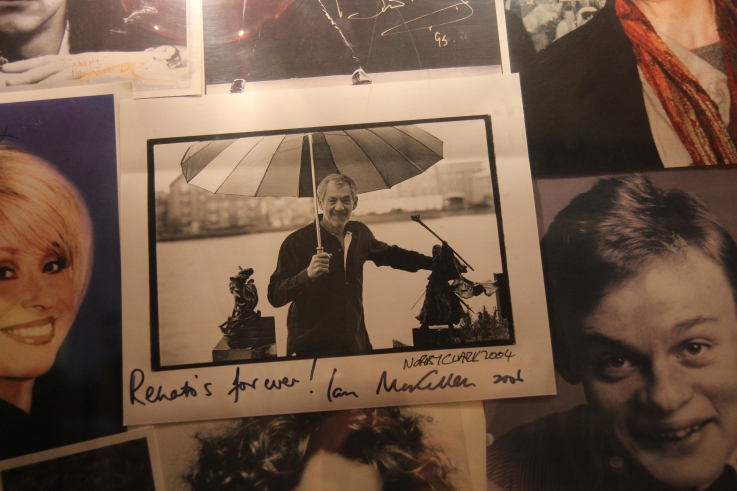 It was here that Paul McGann and Nick Moran made cocktails behind the bar and Martin Clunes and Ian Lindsay (Men Behaving Badly) bantered with the locals; John Hurt enjoyed sketching after shows; Peter O’Toole held late night parties and Derren Brown stood quietly in the corner observing the behaviour of those at the bar.

Many aspiring actors spent their student days in the bar. “New Tricks” star Amanda Redman wrote “When I was at the Old Vic Theatre School and then at The Bristol Old Vic, Renato’s became a very important part of my life as it did for my daughter Emily who was also a student here”. Husband and wife teams bring their children; Timothy West & Prunella Scales, Paul and Trisha Edddington, Lynn & John Telfer (The Archers, Bergerac), Andy Hay and Lynda Rook. and Charles Dickens’ Great Grandson Mr Cedric Dickens and his Great Grandson Mr Henry Hawksley paid a very special visit. Only Fools and Horses filmed its final Christmas special in the bar and the first episodes of Casualty were hatched on the back of a cigarette packet.

The bar’s walls are lined with a Who’s Who of theatre, television and music. Comedians the like of Ben Elton, Jack Dee and Jasper Carrot, soaps stars including Eastenders’ Barbara Windsor and Shane Ritchie, Coronation Street and Emmerdale, and cast of British television classics Rising Damp, Yes Minister, The Good Life  and have all added to the mix. Musicians including Bryan May, Freddie Mercury, Ray Davies, George Harrison, Ian Dury, David Essex, David Cassidy and Nick Cave have all been spotted at Renato’s. On a more classical note, great singers from The Welsh National Opera have been coming to Renato’s over the years as have writers such as Harold Pinter, Arthur Miller an Tom Stoppard. The list of respected thesps who have propped up the bar is endless, including Clarke Peters (The Wire), Daniel Day Lewis, Brenda Fricker, Rupert Everet, Greta Scacchi, Miranda Richardson, Alec Guiness, Spike Milligan, Michael York, Simon Shepherd, Bill Wallis, Jeremy Northam, Kenneth Brannagh, Sophie and Emma Thompson, etc, etc.

Treasure Hunt
Can you find any of these details in the bar?